In many complex systems, elements interact via time-varying network topologies.Recent research shows that temporal correlations in the chronological ordering of interactions crucially influence network properties and dynamical processes.How these correlations affect our ability to control systems with time-varying interactions remains unclear. In this work, we use higher-order network models to extend the framework of structural controllability to temporal networks, where the chronological ordering of interactions gives rise to time-respecting paths with non-Markovian characteristics.We study six empirical data sets and show that non-Markovian characteristics of real systems can both increase or decrease the minimum time needed to control the whole system.With both empirical data and synthetic models, we further show that spectral properties of generalisations of graph Laplacians to higher-order networks can be used to analytically capture the effect of temporal correlations on controllability. Our work highlights that (i) correlations in the chronological ordering of interactions are an important source of complexity that significantly influences the controllability of temporal networks, and (ii) higher-order network models are a powerful tool to understand the temporal-topological characteristics of empirical systems. 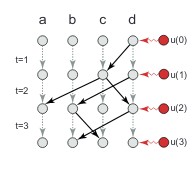