International crop trade networks: The impact of shocks and cascades

Analyzing available FAO data from 176 countries over 21 years, we observe an increase of complexity in the international trade of maize, rice, soy, and wheat. A larger number of countries play a role as producers or intermediaries, either for trade or food processing. In consequence, we find that the trade networks become more prone to failure cascades caused by exogenous shocks. In our model, countries compensate for demand deficits by imposing export restrictions. To capture these, we construct higher-order trade dependency networks for the different crops and years. These networks reveal hidden dependencies between countries and provide an estimate of necessary stock reserves to protect countries from cascading export restrictions. They differ substantially from first order networks that do not take cascading effects into account. We find rice trade most prone to cascading export restrictions. A great number of Asian and African countries are most exposed to cascades. Noticeably, the main suppliers are similar for most of the crops: USA, Canada, Argentina, Brazil, and India. While shocks in the USA mainly affect South America and several Asian countries, the south of Africa is primarily dependent on American and Asian exporters. The north of Africa depends strongly on Europe, in particular via wheat imports. 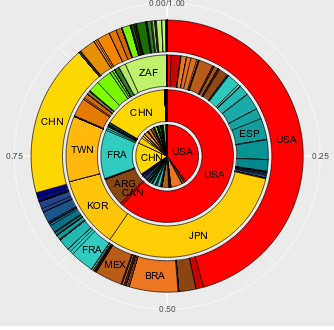