Women Through the Glass-Ceiling: Gender Asymmetries in Wikipedia

Contributing to the writing of history has never been as easy as it is today thanks to Wikipedia, a community-created encyclopedia that aims to document the world's knowledge from a neutral point of view. Though everyone can participate it is well known that the editor community has a narrow diversity, with a majority of white male editors. While this participatory gender gap has been studied extensively in the literature, this work sets out to assess potential gender inequalities in Wikipedia articles along different dimensions: notability, topical focus, linguistic bias, structural properties and meta-data presentation. We find that (i) women in Wikipedia are more notable than men which we interpret as the outcome of a subtle glass ceiling effect; (ii) family-, gender-and relationship-related topics are more present in biographies about women; (iii) linguistic biases manifest in Wikipedia since abstract terms tend to be used to describe positive aspects in the biographies of men and negative aspects in the biographies of women; and (iv) there are structural differences in terms of meta-data and hyperlinks, which have consequences for information-seeking activities. While some differences are expected, due to historical and social contexts, other differences are attributable to Wikipedia editors. The implications of such differences are discussed, specially having Wikipedia contribution policies in mind. We hope that our work contributes to increase awareness about, first, gender issues in the content of Wikipedia, and second, the different levels on which gender biases can manifest on the Web. 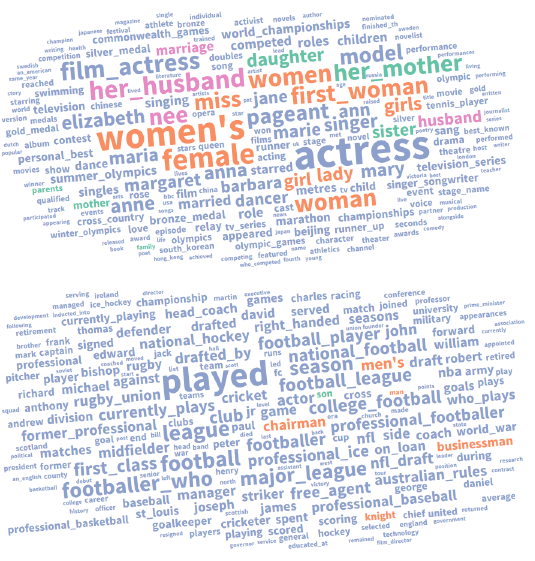