A conceptual approach to model co-evolution of urban structures

Urban structures encompass settlements, characterized by the spatial distribution of built-up areas, and also transportation structures, to connect these built-up areas. These two structures are very different in their origin and function, fulfilling complementary needs: (1) to access space and (2) to occupy space. Their evolution cannot be understood by looking at the dynamics of urban aggregations and transportation systems separately. Instead, existing built-up areas feed back on the further development of transportation structures, and the availability of the latter feeds back on the future growth of urban aggregations. To model this co-evolution, we propose an agent-based approach that builds on existing agent-based models for the evolution of trail systems and urban settlements. The key element in these separate approaches is a generalized communication of agents by means of an adaptive landscape. This landscape is only generated by the agents, but once it exists, it feeds back on their further actions. The emerging trail system or urban aggregation results as a self-organized structure from these collective interactions. In our co-evolutionary approach, we couple these two separate models by means of meta-agents that represent humans with their different demands for housing and mobility. We characterize our approach as a statistical ensemble approach, which allows to capture the potential of urban evolution in a bottom-up manner, but can be validated against empirical observations. 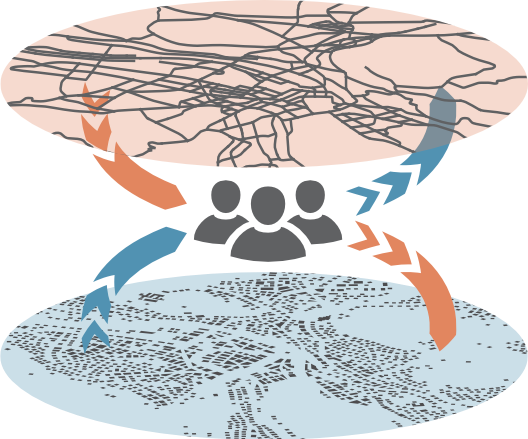