The Network of Counterparty Risk: Analysing Correlations in OTC Derivatives

Counterparty risk denotes the risk that a party defaults in a bilateral contract. This risk not only depends on the two parties involved, but also on the risk from various other contracts each of these parties holds. In rather informal markets, such as the OTC (over-the-counter) derivative market, institutions only report their aggregated quarterly risk exposure, but no details about their counterparties. Hence, little is known about the diversification of counterparty risk. In this paper, we reconstruct the weighted and time-dependent network of counterparty risk in the OTC derivatives market of the United States between 1998 and 2012. To proxy unknown bilateral exposures, we first study the co-occurrence patterns of institutions based on their quarterly activity and ranking in the official report. The network obtained this way is further analysed by a weighted k-core decomposition, to reveal a core-periphery structure. This allows us to compare the activity-based ranking with a topology-based ranking, to identify the most important institutions and their mutual dependencies. We also analyse correlations in these activities, to show strong similarities in the behavior of the core institutions. Our analysis clearly demonstrates the clustering of counterparty risk in a small set of about a dozen US banks. This not only increases the default risk of the central institutions, but also the default risk of peripheral institutions which have contracts with the central ones. Hence, all institutions indirectly have to bear (part of) the counterparty risk of all others, which needs to be better reflected in the price of OTC derivatives. 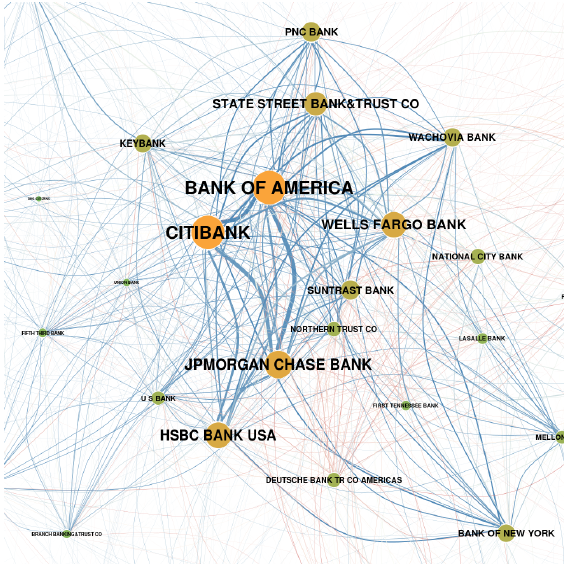