Gender Asymmetries in Reality and Fiction : The Bechdel Test of Social Media

The subjective nature of gender inequality motivates the analysis and comparison of data from real and fictional human interaction. We present a computational extension of the Bechdel test: A popular tool to assess if a movie contains a male gender bias, by looking for two female characters who discuss about something besides a man. We provide the tools to quantify Bechdel scores for both genders, and we measure them in movie scripts and large datasets of dialogues between users of MySpace and Twitter. Comparing movies and users of social media, we find that movies and Twitter conversations have a consistent male bias, which does not appear when analyzing MySpace. Furthermore, the narrative of Twitter is closer to the movies that do not pass the Bechdel test than to those that pass it. We link the properties of movies and the users that share trailers of those movies. Our analysis reveals some particularities of movies that pass the Bechdel test: Their trailers are less popular, female users are more likely to share them than male users, and users that share them tend to interact less with male users. Based on our datasets, we define gender independence measurements to analyze the gender biases of a society, as manifested through digital traces of online behavior. Using the profile information of Twitter users, we find larger gender independence for urban users in comparison to rural ones. Additionally, the asymmetry between genders is larger for parents and lower for students. Gender asymmetry varies across US states, increasing with higher average income and latitude. This points to the relation between gender inequality and social, economical, and cultural factors of a society, and how gender roles exist in both fictional narratives and public online dialogues. 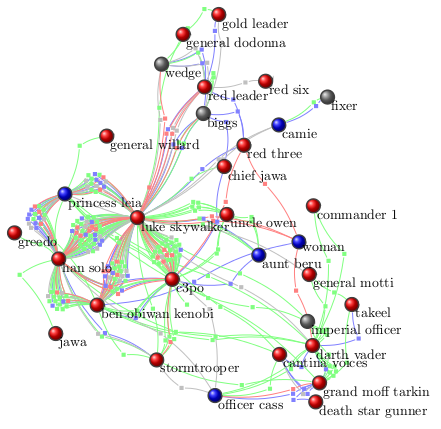