Among species providing uniparental care, the caring parent faces time constraints and may have to compromise offspring care/protection for self-maintenance. In most mammalian species females raise their offspring without receiving help from males. Communal nesting, when multiple females share a single nest where they rear their pups together, may have evolved as a mutually beneficial cooperative behaviour to reduce mothers' nest attendance without increasing the time their offspring are left alone. We tested this hypothesis using data collected in a free-living house mouse population where reproduction occurred in nest boxes and was closely monitored. Individuals were fitted with transponders allowing automatic recording of their location, and a genetic parentage analysis confirmed maternal identity. Compared to mothers raising their pups solitarily, communally nesting mothers spent less time inside their nest. Their pups, however, were left alone for a similar amount of time as solitarily raised pups. The time communal litters were left alone did not covary with the kinship of communally nesting females. These results indicate that communally nesting mothers can allocate more time to foraging or territorial defence without impairing the amount of maternal attention received by their offspring. Nevertheless, communally nesting mothers showed some overlap in their stays at the nest. Offspring may benefit from more regular meals while mothers may gain information on the partner's contribution to combined maternal care which could potentially prevent cheating. 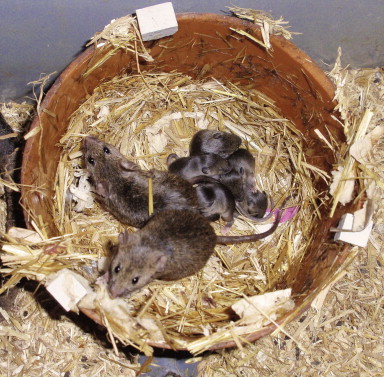