DebtRank: Too Central to Fail? Financial Networks, the FED and Systemic Risk

Systemic risk, here meant as the risk of default of a large portion of the financial system, depends on the network of financial exposures among institutions. However, there is no widely accepted methodology to determine the systemically important nodes in a network. To fill this gap, we introduce, DebtRank, a novel measure of systemic impact inspired by feedback-centrality. As an application, we analyse a new and unique dataset on the USD 1.2 trillion FED emergency loans program to global financial institutions during 2008-2010. We find that a group of 22 institutions, which received most of the funds, form a strongly connected graph where each of the nodes becomes systemically important at the peak of the crisis. Moreover, a systemic default could have been triggered even by small dispersed shocks. The results suggest that the debate on too-big-to-fail institutions should include the even more serious issue of too-central-to-fail. 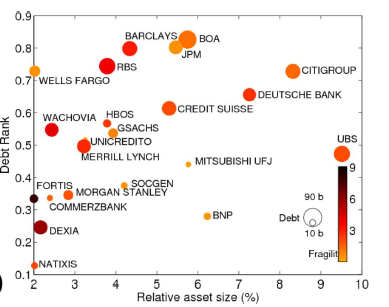