How social influence can undermine the wisdom of crowd effect

Proceedings of the National Academy of Sciences (PNAS) (2011)

Social groups can be remarkably smart and knowledgeable when their averaged judgements are compared with the judgements of individuals. Already Galton [Galton F (1907) Nature 75:7] found evidence that the median estimate of a group can be more accu - rate than estimates of experts. This wisdom of crowd effect was recently supported by examples from stock markets, political elections, and quiz shows [Surowiecki J (2004) The Wisdom of Crowds]. In contrast, we demonstrate by experimental evidence (N = 144) that even mild social influence can undermine the wisdom of crowd effect in simple estimation tasks. In the exper - iment, subjects could reconsider their response to factual ques - tions after having received average or full information of the responses of other subjects. We compare subjects’ convergence of estimates and improvements in accuracy over five consecutive estimation periods with a control condition, in which no informa - tion about others’ responses was provided. Although groups are initially “wise,” knowledge about estimates of others narrows the diversity of opinions to such an extent that it undermines the wisdom of crowd effect in three different ways. The “social influence effect” diminishes the diversity of the crowd without improvements of its collective error. The “range reduction effect” moves the position of the truth to peripheral regions of the range of estimates so that the crowd becomes less reliable in providing expertise for external observers. The “confidence ef - fect” boosts individuals’ confidence after convergence of their estimates despite lack of improved accuracy. Examples of the revealed mechanism range from misled elites to the recent global financial crisis. 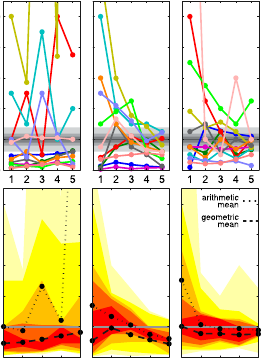