Network evolution based on centrality

We study the evolution of networks when the creation and decay of links are based on the position of nodes in the network measured by their centrality. We show that the same network dynamics arise under various centrality measures, and solve analytically the network evolution. During the complete evolution, the network is characterized by nestedness: the neighborhood of a node is contained in the neighborhood of the nodes with larger degree.We find a discontinuous transition in the network density between hierarchical and homogeneous networks, depending on the rate of link decay. We also show that this evolution mechanism leads to double power-law degree distributions, with interrelated exponents. 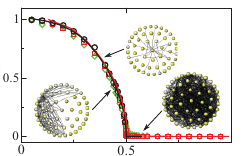