We study the humanitarian response to the destruction brought by the tsunami generated by the Sumatra earthquake of December 26, 2004, as measured by donations, and find that it decays in time as a power law ~ 1/t^(alpha) with alpha = 2.5 + /-0.1. This behavior is suggested to be the rare outcome of a priority queuing process in which individuals execute tasks at a rate slightly faster than the rate at which new tasks arise. We believe this to be the first empirical evidence documenting this recently predicted regime, and provide additional independent evidence that suggests it arises as a result of the intense focus placed on this donation \"task\" by the media. 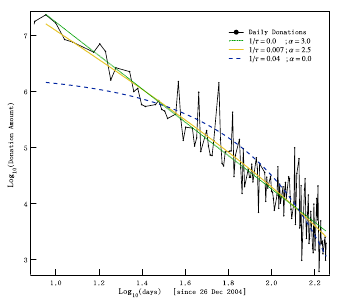