The European Physical Journal B (2009)

In this paper histograms of user ratings for movies (1,...,10) are analysed. The evolving stabilised shapes of histograms follow the rule that all are either double - or triple - peaked. Moreover, at most one peak can be on the central bins 2,...,9 and the distribution in these bins looks smooth `Gaussian - like’ while changes at the extremes (1 and 10) often look abrupt. It is shown that this is well approximated under the assumption that histograms are confined and discretised probability density functions of L'evy skew $α$ - stable distributions. These distributions are the only stable distributions which could emerge due to a generalized central limit theorem from averaging of various independent random variables as which one can see the initial opinions of users. Averaging is also an appropriate assumption about the social process which underlies the process of continuous opinion formation. Surprisingly, not the normal distribution achieves the best fit over histograms observed on the web, but distributions with fat tails which decay as power - laws with exponent –(1 + $α$) . The scale and skewness parameters of the L'evy skew $α$ - stable distributions seem to depend on the deviation from an average movie (with mean about 7.6). The histogram of such an average movie has no skewness and is the most narrow one. If a movie deviates from average the distribution gets broader and skew. The skewness pronounces the deviation. This is used to construct a one parameter fit which gives some evidence of universality in processes of continuous opinion dynamics about taste. 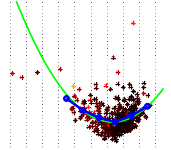