How groups can foster consensus: The case of local cultures

A local culture denotes a commonly shared behaviour within a cluster of firms. Similar to social norms or conventions, it is an emergent feature resulting from the firms' interaction in an economic network. To model these dynamics, we consider a distributed agent population, representing e.g. firms or individuals. Further, we build on a continuous opinion dynamics model with bounded confidence ($ epsilon$), which assumes that two agents only interact if differences in their behaviour are less than $ epsilon$. Interaction results in more similarity of behaviour, i.e. convergence towards a common mean. This framework is extended by two major concepts: (i) The agent's in-group consisting of acquainted interaction partners is explicitly taken into account. This leads to an effective agent behaviour reflecting that agents try to continue to interact with past partners and thus to keep sufficiently close to them. (ii) The in-group network structure changes over time, as agents can form new links to other agents with sufficiently close effective behaviour or delete links to agents no longer close in behaviour. Thus, our model provides a feedback mechanism between the agents' behaviour and their in-group structure. Studying its consequences by means of agent-based computer simulations, we find that for narrow-minded agents (low $ epsilon$) the additional feedback helps to find consensus more often, whereas for open-minded agents (high $ epsilon$) this does not hold. This counterintuitive result is explained by simulations of the network evolution. 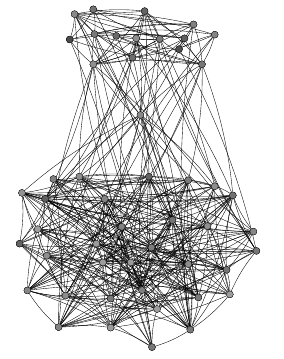