We investigate an extension of the voter model in which voters are equipped with an individual inertia to change their opinion. This inertia depends on the persistence time of a voter's current opinion (ageing). We focus on the case of only two different inertia values: zero if a voter just changed towards a new opinion and nu otherwise. We are interested in the average time to reach consensus, i.e. the state in which all voters have adopted the same opinion. Adding inertia to the system means to slow down the dynamics at the voter's level, which should presumably lead to a slower consensus formation. As an unexpected outcome of our inertial voter dynamics, there is a parameter region of nu where an increasing inertia leads to a faster consensus formation. These results rest on the heterogeneity of voters which evolves through the described ageing. In a control setting of homogeneous inertia values, we only find monotonously increasing consensus times. In the paper, we present dynamical equations for the mean-field case which allow for analytical insight into the observed slower-is-faster effect. 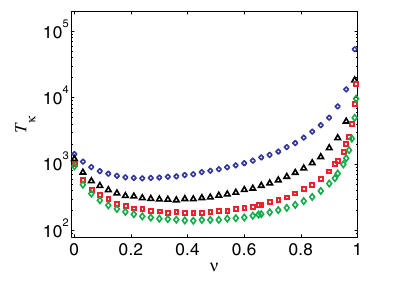