Based on experimental observations in Daphnia, we introduce an agent-based model for the motion of single and swarms of animals. Each agent is described by a stochastic equation that also considers the conditions for active biological motion. An environmental potential further reflects local conditions for Daphnia, such as attraction to light sources. This model is sufficient to describe the observed cycling behavior of single Daphnia. To simulate vortex swarming of many Daphnia, i.e. the collective rotation of the swarm in one direction, we extend the model by considering avoidance of collisions. Two different ansatzes to model such a behavior are developed and compared. By means of computer simulations of a multi-agent system we show that local avoidance-as a special form of asymmetric repulsion between animals-leads to the emergence of a vortex swarm. The transition from uncorrelated rotation of single agents to the vortex swarming as a function of the swarm size is investigated. Eventually, some evidence of avoidance behavior in Daphnia is provided by comparing experimental and simulation results for two animals. 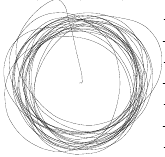