Coexistence of social norms based on in-and out-group interactions

The question how social norms can emerge from microscopic interactions between individuals is a key problem in social sciences to explain collective behavior. In this paper we propose an agent-based model to show that randomly distributed social behavior by way of local interaction converges to a state with a multimodal distribution of behavior. This can be interpreted as a coexistence of different social norms, a result that goes beyond previous investigations. The model is discrete in time and space, behavior is characterized in a continuous state space. The adaptation of social behavior by each agent is based on attractive and repulsive forces caused by friendly and adversary relations among agents. The model is analyzed both analytically and by means of spatio-temporal computer simulations. It provides conditions under which we find convergence towards a single norm, coexistence of two opposing norms, and coexistence of a multitude of norms. For the latter case, we also show the evolution of the spatio-temporal distribution of behavior. 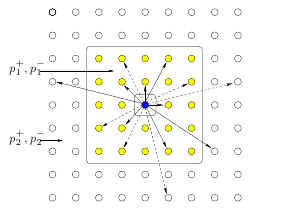